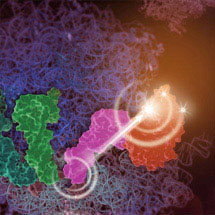 Dr Venki Ramakrishnan’s lab from the LMB’s Structural Studies Division have uncovered the molecular mechanism by which toxins such as ricin and alpha-sarcin inhibit protein synthesis in cells. It was known that these toxins act on a highly conserved RNA loop in the ribosome, the molecular machinery which synthesises proteins in both prokaryotic and eukaryotic cells. However, until this time it has not been clear exactly how they prevent protein translation by the ribosome at a molecular level. The toxins modify or cleave the so-called sarcin-ricin loop in the 50S subunit of the ribosome. The latest paper from Venki’s group provides direct evidence for why this loop is so important for the function of the ribosome.

Every stage of translation depends on protein factors that hydrolyse GTP. The recent publication shows that the sarcin-ricin loop plays a crucial role in positioning a catalytic histidine residue in exactly the right position to hydrolyse the GTP molecule, which is an essential step for the ribosome to proceed to the next stage. If this loop is modified (as by ricin) or cleaved (as with other toxins such as alpha-sarcin) the ribosome is unable to trigger this catalysis and remains stuck. The resulting loss of the ability to make proteins kills the affected cell.

The research, which is published in Science, was funded by the Medical Research Council, the Wellcome Trust, the Agouron Institute and the Louis-Jeantet Foundation.