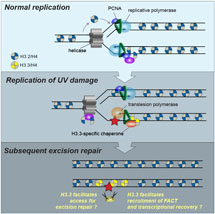 An unexpected finding from Julian Sale’s group in the LMB’s PNAC Division has revealed that a specialised histone protein called H3.3 is needed for packaging UV-damaged DNA during replication. Use of this histone may act as a flag to help the cell find and repair the damage once replication has been completed, potentially reducing the chance of harmful mutations.

Every time a cell divides, the double-stranded DNA needs to be copied with the DNA strands separated in a replication fork. The newly formed DNA is then wrapped tightly around histone proteins to package it. DNA is frequently damaged, for instance by ultraviolet light from the sun. While cells have machinery to repair damaged DNA, they cannot remove damage at the same time as copying it without risking dangerous breaks in the DNA. Instead, they do their best to replicate the damaged segment of DNA and then fix it later.

Alex Frey and his colleagues created a cultured cell line from chickens in which both genes for histone H3.3 have been removed. They discovered that H3.3 is needed when the cells try to replicate DNA that has been damaged by UV light. Without H3.3 replication stalls and cells are also less tolerant of exposure to UV light. However, when H3.3 was added back UV damaged DNA could be replicated and packaged again, and cells could survive higher doses of UV light.

UV light is an important carcinogen and is responsible for the rise in skin cancer cases in recent years. Additionally, some paediatric cancers, such as glioblastoma, have recently been shown to carry mutations in histone H3.3. This new research suggests that DNA is packaged differently after it has been damaged and that using H3.3 in this way may help cells flag regions of the genome harbouring damage making it easier to locate and repair quickly.

The work was funded by the MRC, Jürgen Manchot Stiftung, EMBO and the Fanconi Anemia Research Fund.