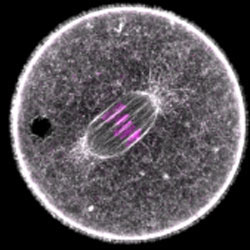 Work carried out by Melina Schuh’s group in the LMB’s Cell Biology Division has provided new insights into how the spindle is asymmetrically positioned in oocytes, which is a vital step in the development of a fertilizable egg in mammals.

The oocyte is stored in the ovary in meiotic arrest until ovulation. At ovulation, the primary oocyte completes meiosis I and discards half of its chromosomes in a small cell termed the polar body. Upon entry of the sperm cell, the secondary oocyte completes meiosis II, and a second polar body is formed and discarded. Finally the haploid ovum and sperm pronuclei fuse to form a diploid embryo. Errors during meiosis can result in aneuploid embryos and may lead to miscarriages, genetic disorders such as Down’s or Klinefelter’s syndrome, or even infertility.

When oocytes eliminate half of their chromosomes before fertilization, they need to divide extremely asymmetrically to form a large egg cell that contains sufficient storage material for embryo development. Defects in asymmetric oocyte division have been suggested to contribute to cases of unexplained infertility in humans. To divide asymmetrically, mammalian oocytes need to move the meiotic spindle from the oocyte’s centre to its surface using an actin-dependent mechanism.

Melina Schuh and Zuzana Holubcova, a post-doc in her group, used high resolution quantitative confocal microscopy and loss-of-function assays to investigate how the spindle is asymmetrically positioned in mouse oocytes. Their work revealed an unexpected function of Rab11a-positive vesicles in this process. The Rab11a-positive vesicles drive the dynamics and modulate the density of an intracellular actin network that is required for asymmetric spindle positioning. In particular, Rab11a-positive vesicles drive the actin network dynamics in a myosin-Vb-dependent manner, and modulate the network density by sequestering and clustering the network’s actin nucleators. Their work also shows that dynamic actin networks of different densities can be generated by adjusting the number and volume of vesicles.

The finding that vesicles can drive the dynamics and modulate the density of intracellular actin networks is not only unexpected and significant from a fundamental science point of view, but also directly relevant for reproduction: if the Rab11a-positive vesicles are lost oocytes cannot divide asymmetrically, which precludes the development of a viable embryo.

The work was supported by the Medical Research Council and a large collaborative FP7 European grant (MitoSys).