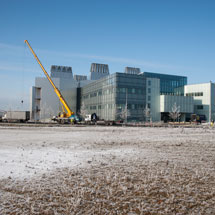 The LMB’s move to its new flagship building was officially completed on 11th March, giving the LMB the space and facilities it needs to maintain its reputation as one of the world’s greatest research institutes.

The move marks the end of over 12 months of logistical planning and preparation by the appointed consultants MovePlan.

Jane Arthurs, Senior Project Manager from MovePlan, who helped to project manage the move, comments: “Our extensive planning and preparation was crucial in ensuring the move went smoothly and to schedule.

“We started on Monday 14th January with the workshops, which meant craning in a huge array of heavy specialist equipment. The lab moves started on 4th February with the Cell Biology Division. By organising the moves by Division, and moving in each Division’s specialist equipment at the same time, we managed to keep the science ‘down time’ to a minimum, which was imperative in guaranteeing minimum disruption not only to the individual but also to their fundamental and sensitive research.” 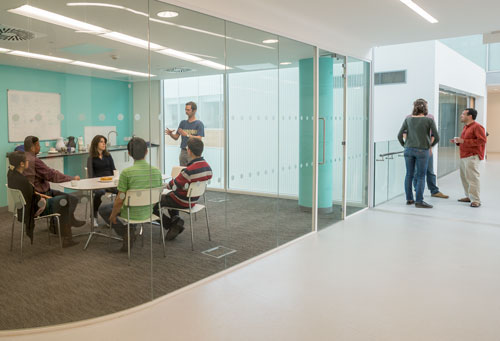 Prior to the move, science stop dates were agreed with group leaders so they could run down current experiments, decontaminate equipment, prepare equipment for the move and pack up their lab contents.

Each lab move was scheduled to happen over just two days, and involved a large number of specialist contractors, including Becker with responsibility for packing and moving hazardous materials, fridges, freezers and complex equipment and Harrow Green, charged with moving crates, glassware and lab equipment.

Mario de Bono a group leader from Cell Biology, one of the first Divisions to move, comments: “Since the move a lot has changed and not much has changed! The new building gives us much more space for the equipment and facilities modern science needs. What’s great is that the intimacy of interactions that characterised life in the old LMB has moved with us and has actually increased. ”

Hugh Pelham, LMB Director said: “The move has gone remarkably smoothly and on time, with much less disruption than many feared. It is great to be in our bright new home and working, and I am very grateful to all those who worked so hard to make this possible.”

The new LMB building and facilities
History of the LMB