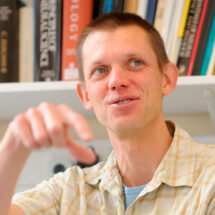 Bill Schafer, group leader in the LMB’s Neurobiology Division, has been elected into the Fellowship of the Academy of Medical Sciences.

The Academy represents the diverse spectrum of medical science – from basic research through clinical application to healthcare delivery. Their mission is to promote medical science and its translation into benefits for society. Academy Fellows are elected based on excellence in medical research, their contribution to medicine and society and are drawn from a range of professions.

Bill joined the LMB as a group leader in 2006. His research focuses on using the nematode worm Caenorhabditis elegans to address basic questions about how ion channels and signaling molecules function in the context of neural circuitry to produce behaviour. Bill’s group was instrumental in developing optical approaches for measuring neural activity in living animals, and they have applied these methods to investigate how individual genes affect the activities of neurons in defined neural circuits, and how this impacts behaviour. In particular, Bill’s group has investigated the roles of conserved ion channels in touch, taste and pain sensation, as well as the mechanisms by which dopamine and other neuromodulators control neural circuits. Bill’s research also extends to developing machine vision approaches for the quantitative analysis of behavioural phenotypes, as well as the application of network science approaches to probe the structure and topology of neuronal connectomes.

Bill becomes the 19thLMB scientist honoured by the Academy of Medical Sciences since its foundation in 1998.