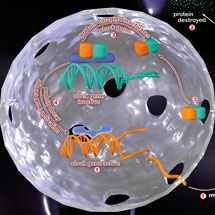 A collaborative research group based at the LMB and the University of Manchester have successfully used a drug to reset and restart the natural 24-hour body clock of mice in the lab. The ability to do this in a mammal opens up the possibility of dealing with a range of human difficulties including some psychiatric disorders, jet lag and the health impacts of shift work.

This work is led by Professor Andrew Loudon from the University of Manchester, and Michael Hastings, group leader in LMB’s Neurobiology Division, working with a multi-disciplinary team of scientists from Pfizer led by Dr Travis Wager.

Andrew Loudon said: “It can be really devastating to our brains and bodies when something happens to disrupt the natural rhythm of our body clocks. This can be as a result of disease or as a consequence of jet lag or frequent changing between day and night shifts at work. We’ve discovered that we can control one of the key molecules involved in setting the speed at which the clock ticks and in doing so we can actually kick it into a new rhythm.”

Most living creatures and plants have an internal body timing system called the circadian clock. This is a complex system of molecules in every cell that drives the natural rhythm processes of everything from sleep in mammals to flowering in plants. Light and the day and night cycle are very important for resetting the clock and fine adjustments are made by several enzymes, including one called casein kinase 1 that has been the centre of this study.
The circadian clock is linked to the 24 hour day-night cycle and the major part of the clock mechanism ‘ticks’ once per day. Each ‘tick’ as represented by the rise and fall of a wave over a 24-hour period. In this case, as a mouse goes up the wave there is an increase in the amount of proteins in the cell that are part of the clock mechanism, and as the mouse goes on the downward part of the wave, these substances are reduced.

Casein kinase 1 works by facilitating the downward curve. The faster casein kinase 1 works, the steeper the downward part of the wave and the faster the clock ticks. Any change in casein kinase 1 activity, faster or slower, would adjust the ‘ticking’ from 24 hours to some other time period. If a person’s body suddenly starts working on a 23 hour or 25 hour clock, many of the natural processes, such as sleeping and waking could soon become out of step with day and night.

The team found a drug that slows casein kinase 1 down and used it in mice where the circadian rhythm has ceased i.e. the clock has stopped ticking all together. In live mice and also in cells and tissue samples from mice, they were able to re-establish the ticking of the clock by using the drug to inhibit the activity of casein kinase 1.

Michel Goedert, Head of LMB’s Neurobiology Division, commented: “We’re all familiar with jet-lag and that sense of being disoriented in time. What is probably less widely understood is how this effect can impact on those with certain mental illnesses. It is crucial to find out what can go wrong at the molecular and cellular level in the brain if we are to determine what treatments will work for patients. If further studies in humans confirm what this study has shown in mice, this could eventually lead to an entirely new approach to treating mental illnesses such as bipolar disorder.”