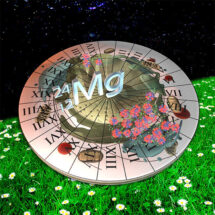 Most organisms, including humans and plants, have circadian rhythms that allow them to adjust their metabolism and behaviour to match the 24-hour cycle of day and night. Circadian rhythms are even observed at the level of individual cells, and are dependent upon a biological clock mechanism that is not fully understood. Work by John O’Neill’s group in the LMB’s Cell Biology Division has shown that magnesium ions are pumped out of cells at night, and let back in again during the day in both human and algal cells. This is a completely novel and evolutionarily conserved mechanism of the cellular circadian clockwork that allows cells to be more metabolically active during the day than at night.

John’s group measured cellular magnesium ion content as well as clock gene activity in human and mouse cells, while their collaborator, Gerben van Ooijen, and his group performed similar experiments in algal cells. They then manipulated cellular magnesium ion transport and observed the effects on circadian rhythms and metabolism. Because magnesium ions determine how active many of the cell’s energy-consuming enzymes are, pumping them out at night allows plant cells to save energy at night and allows human cells to increase their metabolism during the day. These daily magnesium oscillations also affect the circadian rhythm of when ‘clock genes’ are turned on and off, and therefore seem to be a new component of the cell’s biological clock.

Although magnesium is essential for healthy life, many people do not meet the daily magnesium requirements from their diet, and perturbed magnesium balance has been associated with a range of diseases including cancer, type II diabetes, asthma and depression. Although the clinical relevance of magnesium in various tissues is beginning to garner more attention, the interactions between magnesium transport and human health are poorly understood. However, it is already known that circadian disruption, as occurs during aging or shift work, is strongly associated with chronic diseases. Therefore further investigation of the circadian regulation of magnesium and downstream consequences will be important.

The work was funded by the MRC, the Wellcome Trust and The Royal Society