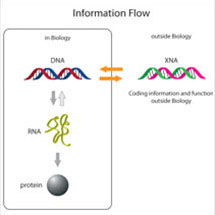 A group of researchers, led by Philipp Holliger in the LMB’s PNAC Division, have created the first synthetic molecules that, alongside the natural molecules DNA and RNA, are capable of storing and replicating genetic information.

Vitor Pinheiro and colleagues from Philipp’s group used sophisticated protein engineering techniques to adapt enzymes, that in nature synthesise and replicate DNA, to establish six new genetic systems based on synthetic nucleic acids. These have the same bases as DNA but the ribose linkage between them is replaced by quite different structures.

In doing this they showed that there is no functional imperative limiting genetic information storage to RNA and DNA. Therefore, the discovery has implications for the understanding of life on Earth. As other informational molecules can be robustly synthesised and replicated, the emergence of life on Earth is likely to reflect the abundance of RNA (and DNA) precursors in early Earth.

One of the practical applications of the techniques developed by the team is likely to be the development of functional nucleic acids, called aptamers, with diagnostic, therapeutic and analytical applications. Aptamers can have a number of significant advantages over the current small molecule and antibody-based therapies. For example, they bind their target molecule with high specificity (like antibodies) but being smaller they are expected to have better tissue penetration. They have low-toxicity and low-immunogenicity and they can be chemically modified to improve their stability and pharmacokinetic properties.
In the past making aptamers ‘body proof’ contributed significantly to production costs. The new HNA genetic system, developed by the LMB team, addresses that issue by efficiently producing molecules that are from the outset less susceptible to enzymatic degradation and better suited for therapeutic use. The development of new aptamers could be useful in the diagnosis and treatment of cancers, haematological, ocular and inflammatory conditions, and other diseases.

The research team included collaborators from the Katholieke Universiteit Leuven in Belgium, the Center for Evolutionary Medicine and Informatics at Arizona State University and the Nucleic Acid Centre at the University of Southern Denmark. The research was funded by the Medical Research Council, the European Framework program and the European Science Foundation.