Home > Insight on Research > Digitization of visual signals in the retina 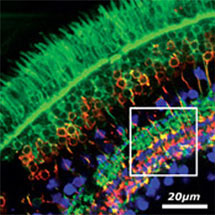 Vision is perhaps the most important sense by which we understand the world. Visual information is transmitted by nerve cells sending signals to each other through special connections called synapses. But how does this happen?

Leon Lagnado’s group in the Neurobiology Division of the LMB is investigating how visual signals are transmitted between neurons in the retina. Using the zebrafish as a model organism, Leon’s group have used new techniques developed in the lab to image the retina of live fish and monitor how the synaptic connections between neurons become active in response to light.

The results indicate that bipolar cells in the retina of zebrafish respond to visual stimulation with a combination of graded and spiking signals. They found that this “digitization” from an analogue format into a digital one first occurs in the part of the bipolar cells that transmits the signal to other neurons (the synaptic terminal). It was previously thought that bipolar cells simply transmitted analogue signals, generating a graded response to light. A digital form of signal is essential for transmitting visual information from the retina to the brain.

By studying the retina Leon’s group hope to unravel the molecular and cellular processes that underlie fundamental aspects of brain function.

The work was funded by the MRC LMB and the Wellcome Trust.