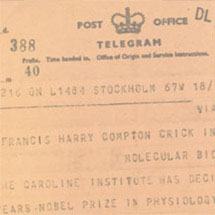 Francis shared the award with Jim Watson, his former collaborator at the LMB, and Maurice Wilkins from King’s College London. The prize was given for their discoveries concerning the molecular structure of nucleic acids, most notably the double helix structure of DNA. Using known data, and the experimental evidence from Maurice Wilkins and Rosalind Franklin, Francis and Jim constructed a model of DNA – which immediately revealed its structure – and showed its significance for the transfer of information in living matter.

Max and John received the Nobel Prize for their studies of the structure of proteins, elucidating the first ever structures. For this they developed the technique of protein crystallography, which uses the way that crystals of proteins cause X-rays to change direction to produce unique patterns from which their structures can be established. This technique is now used worldwide to determine the structure of large molecules.
These awards took the number of Nobel Laureates working in the LMB in 1962 to four: Fred Sanger having won the Nobel Prize in Chemistry in 1958. 50 years later LMB scientists have been awarded at total of nine Prizes shared amongst 13 scientists, the most recent Laureate, Venki Ramakrishnan, continuing to conduct research at the LMB. 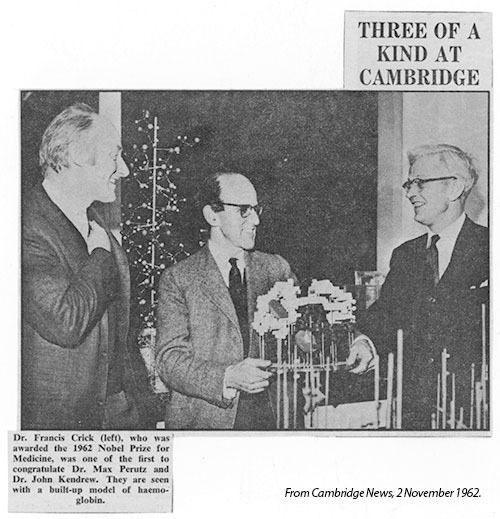