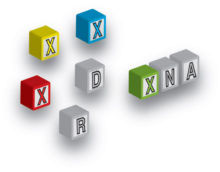 Life on Earth depends on catalysis. Chemical transformations essential for cellular function are too sluggish to happen spontaneously at ambient temperatures and pressures, thus nature has developed myriad catalysts (enzymes) that accelerate the many key reactions necessary for life. Today, proteins are largely responsible for this role, although nucleic acids (RNA and DNA), in addition to their familiar role in storage and propagation of genetic information, can also form enzymes: the ribosome, the molecular machine that manufactures proteins within all cells is an RNA enzyme. Indeed, life is widely thought to have begun with the emergence of a self-copying RNA catalyst; the origin of life itself depends on the emergence and evolution of catalysis.

However, are nature’s familiar ‘biomolecules’ the only options for these crucial roles, or could an alternative life be built on different molecular foundations?

Using synthetic biology, Alex Taylor and colleagues in Philipp Holliger’s group, in the LMB’s PNAC Division, have for the first time shown that catalysts can be formed entirely from unnatural building blocks. This builds on previous work from Philipp’s group that established evolvable “synthetic genetic systems’ based on “XNAs”, chemical cousins of DNA that do not occur in nature. From different XNAs they have developed synthetic enzymes, “XNAzymes”, which catalyse several “cut and paste” reactions, showing that it is possible to evolve enzymes from a range of non-biological chemistries.

This research has provided the first empirical evidence that one of the hallmarks of life, catalysis, can emerge from building blocks that do not occur in nature, with important implications for our assumptions about the chemical origins of life on Earth and the potential for life elsewhere in the universe.
The results imply that ‘our’ chemistry, of DNA, RNA and proteins, may not be ‘special’, and that there may be many other chemicals that could make life possible.

The development of “XNAzymes” could also be utilised in biotechnology and clinical applications. It has been previously suggested that the simplicity and specificity of nucleic acid enzymes based on DNA or RNA may be useful for targeted disruption of, for example, viral or other disease-related RNAs within cells. However, enzymes made from natural nucleic acids are rapidly degraded within the body. Many XNAs overcome this limitation as they are not recognised by the cell’s natural degradation enzymes and are therefore extremely stable, making them potentially useful as robust therapeutic or diagnostic tools.