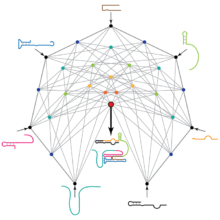 There is compelling evidence that in the distant past, our single-celled ancestors used RNA, a chemical cousin of DNA, for both genetic information storage and metabolism. This primordial “RNA world” would have needed an RNA enzyme able to replicate itself and other primordial “RNA genes”. However, it is not known how such a complex function as RNA replication – which involves the accurate read-out and copying of an RNA template sequence – could have emerged from the relatively simple biomolecular building blocks provided by prebiotic chemistry.

Work by Hannes Mutschler, in Philipp Holliger’s group, in the PNAC Division at the LMB, has uncovered a plausible pathway. In this scenario, pools of short RNAs, which emerge spontaneously by various routes from prebiotic chemistry, can acquire the ability to self-organise into networks that step-by-step “stitch together” much longer RNAs. This process can be greatly accelerated by exposing the RNA pools to freeze-thaw cycles – which might have occurred on the early Earth through day/night or seasonal temperature fluctuations or as the result of geothermal activity. Such freeze-thaw cycles, changing over and over again from a frozen to a liquid state and back, appear to help RNAs to fold into functional structures – a so-called RNA “chaperone” effect. In modern cells, such chaperone activity is crucial for RNA function and usually carried out by proteins. Thus, the same task that in modern biology requires complex protein machines, can in principle, be performed by simple physicochemical processes.

This study shows how cyclic processes (such as freeze-thaw cycles) can drive an expansion in complexity in both form and function from pools of short RNAs and thereby bridge a gap between prebiotic chemistry and the emergence of complex RNA catalysts. Furthermore, it highlights the potential importance of water ice and its phase transitions in the emergence of life on Earth.

This work was funded by the MRC and a FEBS Long-Term Fellowship.