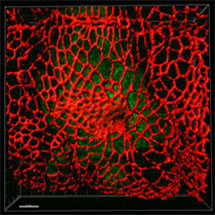 Katja Röper, Independent Investigator Scientist in the LMB’s Cell Biology Division, has discovered a key mechanism of tissue and organ formation in fruit flies that might also apply in vertebrates.

Many organs in both vertebrates and invertebrates, such as the gut, liver, kidney, vasculature and lung, are tubular in structure. The formation of tubular structures through processes collectively called tubulogenesis is a key process of organ formation in all animals. However, the cytoskeletal rearrangements that cause the cell shape changes that drive tubulogenesis are not well understood.

Katja’s research, published in Developmental Cell, develops our understanding of these cytoskeletal rearrangements and highlights the basis of a process in which tubes are formed during development.
The study was unique in providing the first analysis of tissue and cytoskeletal organisation in the fruit fly embryo using a combination of fly genetics, confocal, live-time lapse and super-resolution microscopy based on structured illumination.

As Katja explains: “Tubes are made up of polarised epithelial cells and my research reveals a mechanism by which the local arrangement of Crumbs – a membrane protein that is usually important to maintain the epithelial polarity in tissues – directly affects how the intracellular cytoskeleton is organised to then modulate the cells’ shapes to drive tube formation.
“The findings also show that a key part of this process is the direct interaction of Crumbs proteins on neighbouring cells, a novel mechanism of interaction for this polarity protein.”

Mechanisms of how tissues form appear to be conserved between flies, mice or humans, suggesting that these findings could be extrapolated to the development of vertebrate embryos.

This work was supported by the BBSRC the Wellcome Trust and the Medical Research Council.