Home > Insight on Research > How does biology make tubes? 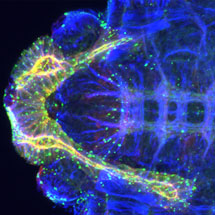 During the development of an organism, whether it be a worm, fly, dog or human being, the early embryo must build different structures which will later become the body’s organs. Many structures within an organism are tubular: the veins and arteries; the gut; as well as the kidneys and lungs. So how do the individual cells making up a potential organ arrange themselves into a tube shape?

Alexander Booth and Katja Röper in the LMB’s Cell Biology Division, together with collaborators at the University of Cambridge, have discovered how microtubules, which are found within cells, contribute to making larger tubular structures.

All cells contain a cytoskeleton, which provides internal scaffolding for the cell. During embryo development, changes in the cytoskeleton can make the cell vary its shape, and it is this variation which in turn drives the formation of complex tissues, including organs. It is known that one component of the cytoskeleton, called actin, is able to cause these changes, but Alexander, Katja and their collaborators have shown how a second component, the microtubules, rearrange during the formation of tubes in the salivary glands of the fruit fly.

The Röper lab uses the fruit fly as a model organism due to its genetic and relative physiological simplicity compared to mammals. By fluorescently tagging the proteins that make up microtubules, the scientists were able to follow the microtubule rearrangements during the formation of salivary glands. They showed that microtubules stabilise actin within the cytoskeleton to help drive this development. To further demonstrate the importance of microtubules, Katja and her collaborators genetically introduced a new protein to the cells, which severs microtubules. They discovered that this prevented the early stages of cell-shape change, therefore inhibiting the formation of the tubes.

Whilst this work was carried out in flies, the results are unlikely to be restricted to this species as basic biological processes of tissue formation are conserved across species in evolution. Therefore, results gathered in fruit flies are important to help understand organ formation, and malformation, in humans.