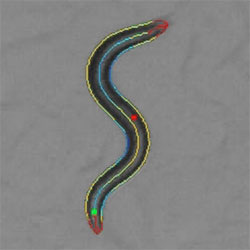 While fully sequenced genomes are available for many important experimental organisms, a major challenge has been to identify the functions of the genes identified. A method for phenotyping that is both high-throughput, so all an organism’s genes can be phenotyped, and high-content, so inferences about gene function can be made with precision, has been required.

The nematode worm, C. elegans, is a major experimental model for neuroscience, as well as aging and development. A key output of the nervous system is motor behaviour. A variety of neural disturbances can be seen as changes in motion, and thus locomotion is a useful phenotype for neurogenetics in this model organism. Bill Schafer’s group, in the LMB’s Cell Biology Division, have developed methods for observing the behavioural phenotypes of the nematode, and from this have generated the largest phenotype database for the nematode to date.

The research, led by PhD student Eviatar Yemini, involved designing and building an array of automated tracking microscopes, and collecting over 10,000 short (15 minute) videos of freely-behaving worms. These videos were then segmented and processed to obtain a compressed representation of the worm’s posture and movements, and algorithms were devised to measure parameters relevant to locomotion and other known worm behaviours. The segmented movies, along with feature summaries and statistical comparisons to wild-type controls, have been organised into a unified database, which is publicly available. This ever-increasing set of behavioural data provides a key resource for future neuroscience research in this important model organism.

An MRC Centenary public participation project, Worm Watch Lab, devised by Andre Brown, a postdoc in Bill’s group, will also provide information that will be incorporated into the phenotypic database. This project uses crowdsourcing to analyse the collected video data with respect to egg-laying, a behavior that cannot be measured as accurately by machine as by the human eye.

This research was supported by the Medical Research Council, an NIH grant, a Gates Fellowship and a Human Frontiers Postdoctoral Fellowship.