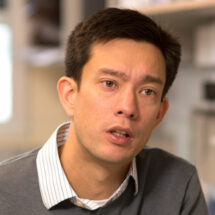 Jason Chin, group leader in the LMB’s PNAC Division, has been elected into the Fellowship of the UK Academy of Medical Sciences.

The Academy represents the diverse spectrum of medical science – from basic research through clinical application to healthcare delivery. Their mission is to promote medical science and its translation into benefits for society. Academy Fellows are elected based on excellence in medical research, their contribution to medicine and society and are drawn from a range of professions.

Jason has pioneered the development and application of methods for reprogramming the genetic code of living organisms. These approaches allow the site-specific incorporation of designer unnatural amino acids into proteins in diverse cells and organisms. It enables scientists to understand and control the function of proteins in cells with unparalleled precision and to produce new proteins. This achievement has changed the universal belief that some components in a cell, such as the ribosome, are un-evolvable as they are essential for the cell to work.

Jason joined the LMB as a group leader in 2003. In 2012 he became the Head of the Centre for Chemical and Synthetic Biology (CCSB) at LMB. Since 2012 he has also been Professor of Chemistry and Chemical Biology at the Department of Chemistry, University of Cambridge.

Jason becomes the 17th LMB scientist honoured by the UK Academy of Medical Sciences since its foundation in 1998.