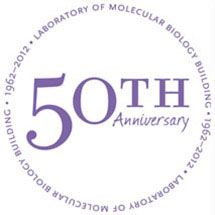 On 28 May 1962, the MRC Laboratory of Molecular Biology (LMB) was officially opened by Her Majesty The Queen.

The 22,000 sq ft (2,044 sq m) purpose built science laboratory was built next to, and opened at the same time as, the new Addenbrooke’s Hospital – so beginning the development of a major site for first-class medical research, teaching and health care.

By the late 1950s, new methods for determining the structure of proteins and nucleic acids, together with advances in microbial genetics and biochemistry, had opened up a new field of research – molecular biology. The Medical Research Council (MRC), realising the potential for medicine and allied subjects, agreed to build a new laboratory for this field of research – and so, 50 years ago, the Laboratory of Molecular Biology began its pioneering work.

The Laboratory brought together a host of talented people. It started with about 30 scientists, and a roughly equal number of graduate and postdoctoral students and visitors. Today, following two major extensions to the original 1962 building, the LMB houses over 500 scientists and supporting staff, and around 80 PhD students, drawing in people from all over the world.
The work of LMB scientists has led to numerous awards and prizes. These include 9 Nobel Prizes, for pioneering work and development of key techniques in areas such as: determining of protein structures, genetic studies, 3D electron microscopy, monoclonal antibody production and DNA sequencing. The LMB’s work has also led to successful commercial applications, with several scientists founding biotechnology start-up companies, and to translational research to develop diagnostic and therapeutic agents.

To continue this success into the next 50 years and beyond, the LMB will move into a new, state-of-the-art building in Autumn 2012. Situated on the Cambridge Biomedical Campus (Addenbrooke’s Site), the 30,000 sq m building will include ample space for modern equipment and facilities, and we look forward to another 50 years of innovative research.