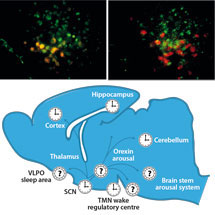 Specific loss of Bmal1 (green cells)
in histaminergic cells (red cells)
within the TMN
(Images from Prof Bill Wisden lab)It is well known that all animals have an internal circadian clock that responds to daily environmental changes of light and darkness, to inform the body to rest and sleep, or wake and be active. As well as a master clock, found in the part of the brain called the suprachiasmatic nucleus (SCN), other areas in the brain have now been shown to contain local clocks, but how these operate in conjunction with the SCN in regulating sleep-wake behaviour has been unknown. For the first time research has shown a role for a local brain clock in enabling appropriately timed sleep-wake activity within the circadian cycle.

The study by Xiao Yu, Bill Wisden and Nick Franks, at Imperial College London, and Michael Hastings’ group in the LMB’s Neurobiology Division, looked at the role of a local brain clock in an area called the tuberomammilary nucleus (TMN), which was known to control the sleep-wake cycle. The TMN is composed of histaminergic neurons that are inactive during sleep, but release a compound called histamine during waking hours, which awakens the body. By measuring the electroencephalograms (EEGs) in mice they were able to compare the sleep-wake cycles of animals that had a functioning local clock in the TMN region with those where this clock had been selectively removed. In these mice lacking the TMN clock, much higher levels of the enzyme that makes histamine were produced, and they stayed awake for much longer periods then usual. They also experienced a shallower depth and more fragmented sleep and had a much slower recovery period after sleeplessness and impaired memory. These results indicate that there is an active clock-like mechanism in histaminergic neurons and provides the first evidence of local clocks working alongside the master SCN clock.

Sleep disorders are detrimental to our general health, well-being, and mental health. Understanding the role and function of local clocks could enable us to design better drugs and treatment for those with sleep disorders, for example patients with neurodegeneration who are known to have poor sleeping patterns.