New research from Madan Babu’s group in the LMB’s Structural Studies Division, in collaboration with Toby Gibson from the European Molecular Biology Laboratory in Heidelberg, has shown that the targeted movement of mRNA molecules to allow proteins to be synthesised in specific locations has important implications in cell signalling and development.

Proteins have many different roles, with examples from structural proteins that create the shape of the cell, to enzymes that perform metabolic reactions, and disordered protein regions that are important for signalling and regulation. Some proteins are not uniformly spread out within the cell, but are present in specific locations. For these to work correctly, it is vital that they are in the right place. Many such proteins are moved to their destination after they have been synthesised. However in some cases, the mRNA molecules that code for the protein are themselves transported, so the new protein can be translated at exactly the right place. 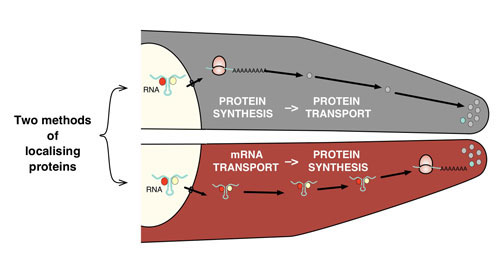 Robert Weatheritt and his colleagues, from Madan’s group, have performed a computational analysis to understand the importance of this movement of mRNA. They analysed large, publicly available genomic (DNA) and proteomic (protein) datasets to discover the differences between proteins that are moved after synthesis, and those that are created at their site of action. They found that proteins synthesised on-site often provide essential components required to activate the signalling machinery. They also tend to encode proteins that have the capacity to nucleate and form reversible, non-membranous assemblies. These results further suggest that targeted mRNA movement limits the exposure of potentially harmful proteins to the cellular environment.

Robert explained, “the targeted movement of mRNA means the cell can produce these proteins exactly when and where they are required, allowing precise signalling within the cell”. He further notes that mislocalisation of certain proteins can have dramatic effects on cell regulation and development, and has been linked to Fragile X-syndrome and a number of neurodegenerative diseases.
Funding for this work was provided by the MRC, the European Molecular Biology Laboratory and the Canadian Institute of Health Research.