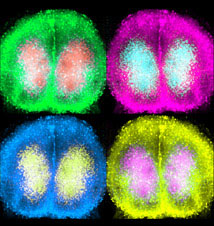 Our cycle of sleep and wakefulness is controlled by a daily (circadian) body clock in our brain. When this cycle happens in a regular way people function well, but when this cycle is disturbed it can lead to a severely disrupted life. The suprachiasmatic nucleus (SCN)  is part of the body clock and individual neurons of the SCN contain their own 24-hour clock, but they operate best when connected together in their neural circuit and run in synchrony.

Michael Hastings’ group in the LMB’s Neurobiology Division, in collaboration with researchers at the University of Manchester, have uncovered a previously unrecognized mechanism of biochemical signalling within the clockwork, which reveals how the body clock keeps 24-hour time.

Led by post-doctoral researcher, Marco Brancaccio, the group exploited a new genetically specific way of controlling biochemical signalling pathways in nerve cells, a method known as “pharmacogenetics”. The group monitored the cell- and circuit-level timing by imaging circadian rhythms of clock gene activity in cultures of SCN tissue from genetically modified mice. They controlled in a very specific way individual biochemical signalling pathways in targeted SCN neurons, and revealed a central role for the Gq/calcium signalling pathway in allowing the SCN to encode 24-hour time within its neural circuit. This provided a completely new perspective on how the circadian clock of the brain keeps accurate 24-hour time.

Understanding the brain mechanisms behind this cycle could lead to therapeutic ways to control the body clock when it goes wrong, in situations such as insomnia, dementia and shift-work.