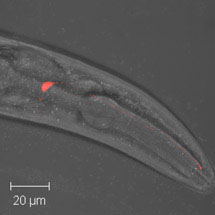 Transmembrane channel-like (TMC) genes encode a conserved family of predicted membrane proteins in animals. The founding member, human Tmc1, is strongly linked to deafness, being expressed in cochlear hair cells and known to be required for their function. However, the precise molecular function of these proteins has until now been unknown.

Marios Chatzigeorgiou, from Bill Schafer’s group in the LMB’s Cell Biology Division, along with collaborators from Korea University College of Medicine have found that the C. elegans TMC-1 protein forms an ion channel that links a sensory stimulus (external salt) to neuronal activity in the worm. This is the first demonstration that TMC proteins form ion channels and the first demonstration that they are sensory receptors. More generally, the study suggests that TMCs comprise a new family of ion channels that may participate in a range of sensory transduction processes in humans and other animals.

Hearing and salt taste are perhaps the least well-understood human senses and the identity of the mechanoreceptor channel in the human ear is one of the long-standing mysteries of sensory biology. The finding that TMCs form sensory ion channels make Tmc1 a prime candidate for constituting the hair cell mechanotransducer in humans and may make it an excellent target for treating hearing loss.

This research was supported by the MRC LMB, the National Research Foundation of Korea and Korea Health technology R&D Project of Ministry of Health & Welfare.