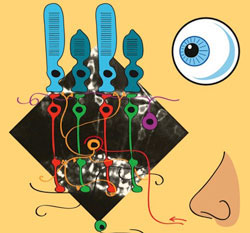 New research from Leon Lagnado’s group in the LMB’s Neurobiology Division shows how food-related smells ‘re-tune’ zebrafish vision by making the retina more sensitive to moving objects, such as the prey that zebrafish eat.

The way the brain processes information from one sense depends on the activity of other senses. For instance, we all know that to listen closely to some music, it often helps to shut one’s eyes. Surprisingly, the sense of smell also interacts with the sense of vision. It has generally been thought that these interactions occur in the brain, even though it is known that some neurons activated by odours also send signals directly from the nose to the retina.

Using live zebrafish expressing fluorescent proteins designed to light up when synapses are active, the team of researchers led by postdoc Federico Esposti used a multiphoton microscope to image into the retina and observe the activity of synapses as the animal responded to different visual stimuli and smells. The Lagnado group are the first in the world to be able to observe the activity of hundreds of synapses in live animals, and it was only by doing this that they could assess how one sense interacts with another.

The retina splits visual information into two pathways – the “ON” pathway responds to increases in light intensity and the “OFF” pathway to decreases. The team found that food smells act selectively on the OFF pathway, making the retina more sensitive to regions of negative contrast, such as dark spots caused by prey moving across the field of vision. The key chemical involved in this process is dopamine, which acts by making the synaptic connections from neurons in the OFF pathway more effective at transmitting visual signals, thereby increasing the sensitivity of the retina in response to food smells.

The same connections between the nose and retina occur in other animals, including humans. It therefore seems likely that the interaction between the sense of smell and the sense of vision does not only occur in the central part of the brain, but starts in the retina itself. This process of olfactory-visual integration is likely to be relevant to different aspects of behavior, especially hunting and prey-capture in zebrafish.

This work was supported by the Medical Research Council and a grant from the Wellcome Trust.