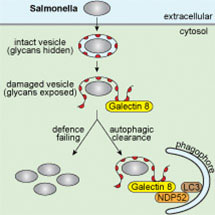 Felix Randow’s group in the LMB’s PNAC Division has identified Galectin-8 as a novel danger receptor and factor of the cellular machinery that protects human cells against bacterial invasion. Galectin 8, a sugar-binding protein in the cytosol, was discovered to be a key component in limiting the growth of Salmonella and to participate in the early line of defence against infection.

Galectin-8 limits the ability of pathogenic bacteria such as Salmonella to grow in the cytosol of human cells. Whilst other receptors of the innate immune system detect pathogen-derived molecules, Galectin-8 senses damage to cell-derived organelles, i.e. bacteria-containing vacuoles. Vacuoles are an essential stepping-stone for bacteria invading the cytosol of cells. Damage caused by bacteria to vesicles releases glycans, complex sugar-containing molecules, into the glycan-free environment of the cytosol. Here their detection by Galectin-8 triggers anti-bacterial effector mechanisms such as autophagy. Since Galectin-8 monitors the integrity of cellular vesicles, it only indirectly detects the entry of pathogens into the cytosol. However, since many pathogens in addition to Salmonella cause vesicle damage, the function of Galectin-8 as a danger receptor enables the detection of even evolutionary distant pathogens.

Defects in the delicate network of autophagy-inducing defence pathways are likely to cause susceptibility to infections and promote inflammation, for example in Crohn’s disease.