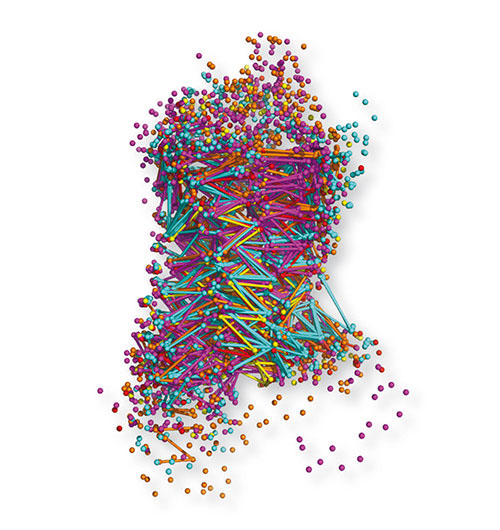 G-protein-coupled receptors (GPCRs) are a family of cell-surface proteins that are vital for various physiological functions including vision, smell, taste, and behavior. They are also the pharmacological targets of ~30% of prescribed drugs. For example, beta-blocker drugs prescribed for cardiac ailments target the β-adrenoreceptors − known GPCRs. The importance of GPCR biology was emphasised by the latest Nobel Prize in Chemistry (2012), awarded for studies of GPCRs.

Scientists from the LMB’s Structural Studies Division, led by M. Madan Babu, in collaboration with Chris Tate (LMB) and Gebhard Schertler (Paul Scherrer Institut) have used publically available information about the 3D structure of GPCRs and systematically analysed it using innovative computational methods that exploit concepts from network theory. In their research, published in the journal Nature, they have uncovered a network of intra-molecular non-covalent contacts between amino acids in trans-membrane helices that is conserved across the 3D structures of nearly all, functionally diverse, GPCRs.

As lead researcher A. J. Venkatakrishnan explained, “the conserved network of non-covalent contacts identified in the study could aid in building accurate computational models of GPCRs, which can be used for structure-based drug discovery”.

Co-researchers Xavier Deupi and Guillaume Lebon added, “the findings can be used to provide an important starting point to understand why mutations in certain amino acid positions in GPCRs cause disease and may aid in the interpretation of naturally occurring mutations in the human population”.

Recent advances in GPCR biology have led to the determination of new structures of several GPCRs in quick succession and this work reveals new, and critically important details about the similarities in the structural organisation of this fundamentally important family of proteins.

This work was supported by the MRC LMB, HFSP, the EMBO Young Investigator Program, ERASysBio1, an LMB Cambridge Scholarship, a St. John’s College Benefactor Scholarship Heptares Therapeutics, the CNRS and Agence Nationale de la Recherche, the Swiss National Science Foundation and the ETH Zürich within the framework of the National Center for Competence in Research in Structural Biology Program, the MRC Technology Development Gap Fund and Pfizer.