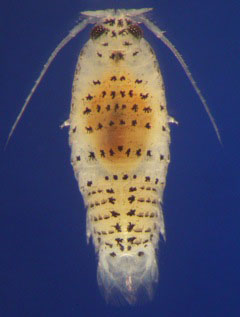 Work carried out by Michael Hastings’ group in the LMB Neurobiology’s Division, together with collaborators at Leicester, Bangor and Aberystwyth Universities has combined expertise in molecular genetics and marine biology to address a long-standing question about tidal behaviour in marine organisms. They were interested in whether these animals are driven by a dedicated internal tidal clock or are controlled by a system based on a modified 24-hour circadian clock.

Marine animals that live on the coast are very important ecologically and commercially. It is known that they use internal body clocks to adapt to their complex and demanding environment. The discovery of the circadian clock mechanisms in terrestrial model species from fungi to humans was a major breakthrough for biology. Indeed, 24-hour clocks permeate every aspect of terrestrial physiology and behaviour, so tidal timers could perform an equally critical role for marine physiology.

The intertidal crustacean used in these experiments, Eurydice pulchra, which was the subject of Michael’s PhD research in 1980, is not a “model organism”. It cannot be reared in the lab, and its genome sequence is not yet known. For each experiment animals had to be collected on the shore and it took a considerable time to characterize Eurydice behavioural and physiological rhythms and then to identify its circadian clock genes, before starting to manipulate these molecules. However, using a combination of environmental and molecular manipulations it was possible to show that when the daily 24-hour circadian clock is disrupted, a 12.4 hour internal tidal clock continues “ticking” perfectly.

By having (at least) two clocks (daily and tidal) Eurydice can control its behaviour and physiology to exploit the temporal complexity of the intertidal environment, which varies with tidal, daily, semi-lunar, lunar and annual periodicities. The two clocks working together could generate semi-lunar and lunar cycles of behaviour because over the course of a month they will move in and out of phase with each other, creating a 15-day beat effect. The molecular mechanism behind this tidal clock is still a mystery but the finding offers scope for new discoveries of how genes control biologically critical behaviour.

Work on different biological rhythms is important because these relate directly to our own fundamental cycles of sleep and wakefulness and what happens when our rhythms are out of synchrony, for example due to ‘jet-lag’. While nearly all of the work in chronobiology is focused on circadian 24-hour rhythms, animals and plants use a diversity of body clocks to adapt to the complexity of environments. This study has underlined that other types of internal clocks have evolved that are equally important for a significant fraction of the biomass.

This long-term project was supported by the MRC and the BBSRC.