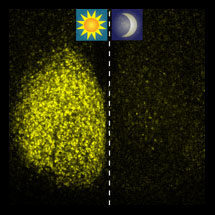 Circadian clocks are found across all higher species, controlling daily rhythms of behaviour and physiology. They are thought to “tick” by producing and then degrading circadian proteins on a 24 hour cycle. At a molecular level, they typically involve expression of “clock” genes that are inhibited approximately every 24 hours by the proteins they encode. The principal clock in mammals is the suprachiasmatic nucleus (SCN) of the hypothalamus, and the Period genes (Per1, Per2) are essential for its circadian oscillation. For the first time it has been possible to peer into the “clockwork” using fluorescence microscopy and watch this process in real-time, counting how many Period2 molecules are present across the 24h cycle, recording how quickly they move around the cell, when and where, and showing how this molecular mobility is regulated by drugs that change the speed of the body clock. This work gives the first insight into the molecular dynamics of how a key protein behaves inside the neurons of the mammalian circadian clock.

Nicola Smyllie and others in Michael Hastings’s group, in the LMB’s Neurobiology Division, in collaboration with Andrew Loudon’s group from the University of Manchester, generated a genetically modified “knock-in” mouse expressing a fluorescent fusion of native Period2 protein (Per2::Venus). State-of-the-art fluorescence microscopy was then used continuously, over 3 or 4 days, to image in real-time the intracellular behaviour, abundance and circadian dynamics of Per2 in the SCN. This provided, for the first time, quantitative measurements of molecular abundance and mobility that will inform the development of mathematical models of the mammalian “clockwork” and will allow key molecular events that enable the clock to “tick” to be studied. Until now, analysis of the clock of invertebrates has strongly influenced models of the mammalian clock but this work in mice has overturned the incorrect assumptions made previously that were based on findings in flies and other lower species.

Disorders of the circadian clock, ranging from jet-lag, through shift-work to sleep disorders associated with ageing, dementia and psychiatric illness, have a major impact on our health. This work went on to show how particular drugs affect the behaviour of the clock proteins and could provide a first approach to developing suitable therapeutics to treat sleep disorders.

The work was funded by the MRC and BBSRC.