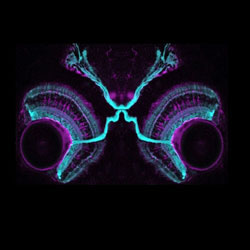 Work in Leon Lagnado’s group in the LMB’s Neurobiology Division is showing how synapses transmit visual signals in the retina of zebrafish. The group designed fluorescent proteins that light up when synapses are active and made transgenic zebrafish expressing these proteins in retinal neurons. They then used a multiphoton microscope to directly observe the activity of synapses in the retina of live fish as they responded to different visual stimuli. This is the first time that it has been possible to observe the activity of hundreds of synapses in a living animal.

Senses, such as sight, vary in their sensitivity to a stimulus and a common alteration is a decrease in sensitivity when the strength of the stimulus is increased, termed adaptation. The advantage of adaptation is that it prevents saturation of the response to strong stimuli and allows for continued signalling of future increases in stimulus strength. But adaptation comes at a cost: a reduced sensitivity to a future decrease in stimulus strength. Leon’s group found an intriguing strategy by which the retina compensates for this loss of information: while some neurons adapt following a strong stimulus, a second population gradually become sensitised.

Anton Nikolaev, a post-doctoral worker in the group, investigated how the synaptic connections between neurons within the retinal circuit underlie the processes of adaptation and sensitisation. He compared how synapses of excitatory and inhibitory neurons responded to fluctuations over time and found that decreases in sensitivity to temporal contrast reflect the “turning down” of excitatory synapses, leading to adaptation. Increases in sensitivity were caused by excitatory synapses being “turned up” by a mechanism involving negative feedback: the output from the excitatory synapse stimulates an inhibitory neuron that circles back directly onto that synapse. When the inhibitory synapse depresses, the excitatory synapses become more sensitive. Intriguingly, while some microcircuits within the retina caused adaptation in the neurons that send signals back to the brain, other microcircuits cause sensitisation. The group will now investigate whether this is a general mechanism by which the strength of neural responses is turned up and down in the brain.

In the future, it is hoped that these methods can be adapted to observe how visual signals are altered in diseased retinae of mice and to investigate how therapies based on gene transfer or stem cells might restore these signals. This work will be carried out in collaboration with Robin Ali’s group at the Institute of Opthalmology, London.

This work was supported by the Medical Research Council and a grant from the Wellcome Trust.