Home > Insight on Research > Discovering the origins of biological timekeeping 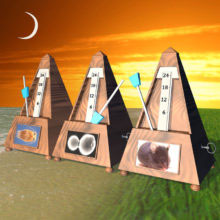 The existence of an endogenous daily clock in humans is well known: it is what drives the 24-hour sleep/wake rhythm to match the daily cycle of night and day. That this biological circadian rhythm occurs in individual cells, and that they continue to ‘tick’ in a petri dish is now well-accepted scientifically, but the mechanism that allows cellular clocks to keep time remains poorly understood.

Two recent collaborative studies, involving John O’Neill’s group from the LMB’s Cell Biology Division, have used a ‘comparative chronobiology’ approach to find out which biological cogs allow clocks to run at the right speed in order to time 24 hours. The research teams selected organisms with rhythms that are much shorter then 24 hours and compared their clock mechanism with that in mammalian cells.

A multi-centre, UK-based consortium, which also includes Michael Hastings’ group from the LMB’s Neurobiology Division, looked at the intertidal isopod crustacean, Eurydice pulchra. This ‘marine woodlouse’ lives in the sand within the intertidal range, coming out to swim every 12.4 hours at high tide. Importantly Eurydice continues these swimming rhythms when taken from the beach and placed under constant laboratory conditions, meaning that it has an internal circatidal clock.

In the other study, John’s group collaborated with Helen Causton, at Columbia University, USA, on research into the metabolic cycles of Sacchromyces cereviseae (Baker’s yeast). Yeast displays robust rhythms in oxygen consumption (respiration) with a period of 2-3 hours .

Both these organisms were compared with isolated mouse cells that have circadian (~24 hours) rhythms of gene expression and metabolism. In both studies it was found that the mechanisms identified as being important for circadian clocks in mammalian cells play a similar role in sustaining oscillations with shorter periods in other, very different organisms. Every feature and mechanism of the circadian clock in mammalian cells that were tested played a similar role for the circatidal rhythm in Eurydice and the metabolic rhythm in yeast.

These observations suggest some general principles of biological rhythms, and also give us important clues as to how the circadian clock in humans might have evolved. Knowing more about the cellular clock mechanism is also essential for understanding and designing preventative strategies for those approximately 15% of the work force, in developed nations, who are engaged in shift work and as a consequence suffer from significantly increased risk of chronic diseases, such as type 2 diabetes, cardiovascular disease, neurodegeneration and many cancers.

The Eurydice consortium work was funded by the BBSRC and MRC. The yeast research funding came from the MRC, the Wellcome Trust and the Amgen Scholars Program.