Home > Insight on Research > Fast, simple, accessible and affordable: The future of cryo-EM

Is it possible to improve imaging of purified biological specimens in electron cryo-microscopy (cryo-EM) while also reducing its cost? The latest proof-of-principle paper from Chris Russo’s group says yes, and indicates that the answer lies in reducing the electron energy in the cryo-EM from the current standard of 300 or 200 kiloelectron volts (keV) to 100 keV. Recent measurements of radiation damage to biological specimens by high-energy electrons have shown that at lower energies there is an increased amount of information available per unit damage. The authors of the paper foresee that future cryo-microscopes designed for ultimate single-particle resolution will be designed to maximise this information. This will then make true atomic resolution (~1 Å) more accessible and affordable.

Five structures in seven days
In this latest pioneering research, the team of LMB researchers demonstrated, with currently available technology assembled together in the laboratory, the potential of imaging at 100 keV. The group succeeded in doing this by reducing the voltage of a standard, commercial 200 kV Field Emission Gun (FEG) microscope to 100 kV. In addition, they attached a commercial hybrid-pixel camera designed for X-ray detection to the camera chamber for low-dose data collection.

In the week that the demonstration microscope was running, the scientists used it to image five single particle specimens: hepatitis B capsid, bacterial 70S ribosome, catalase, DNA protection during starvation (DPS) protein and haemoglobin. These particles range in size from 4.5 MDa to 64 kDa with corresponding diameters from 320 to 72 Å. The datasets thus generated were used to reconstruct 3D structures with resolutions between 8.4 and 3.4 Å, which is the target resolution for biological specimens. The trial samples are embedded in the history of the LMB as well – Max Perutz’s work on the structure of haemoglobin, Venki Ramakrishnan’s work on the form and function of ribosome 70S complex, and hepatitis B virus by Tony Crowther.

Breaking through cryo-EM limitations
In its simplest form, an electron cryo-microscope must have a bright electron source, a stable stage, low ice contamination rate and a large-area, high-efficiency imaging detector. While the first three are available in various commercial instruments, they are not available together in a single microscope designed for high-resolution 100 keV imaging. Optimised large-area imaging detectors for 100 keV electrons are also not currently available, thus making the detector the limiting technological factor in establishing cryo-EM at 100 keV.

Detectors that are optimised for 300 keV electrons can be used at 100 keV but they are expensive and are limited by their small pixel size which can be computationally increased, but this reduces the field of view and increases complexity. Hybrid pixel detectors, on the other hand, have recently found wide success in structural biology, especially in X-ray crystallography at synchrotrons. They can also operate at very high speeds and are impervious to high exposure to a 100 keV electron beam.

Greg McMullan led work to demonstrate a way to use a hybrid-pixel detector to image electrons. A new housing for a detector from DECTRIS, AG of Switzerland was made in the LMB workshop led by Steve Scotcher. Replacing the detector on the microscope took one day, as did reverting the microscope to its original configuration. The authors recognize the limitation of the detector used in the demonstration, which is 32 times smaller than the detectors used in a Titan Krios but the demonstration detector was still effective for proof of principle, including the 3.4 Å DPS structure.

The key requirements for an instrument that can determine sub-nanometre structures by cryo-EM using 100 keV electrons are: a high vacuum, an FEG source, an objective lens with small chromatic aberration, and a large area, direct electron detector that is optimised to give high DQE (imaging quality) at 100 keV. 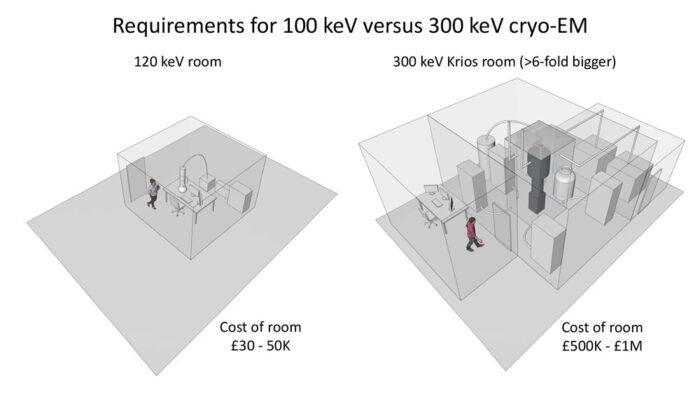 The rapidly changing universe of cryo-EM
In just a decade, cryo-EM has become a mainstay in structural biology, with high-end 300 keV electron microscopes being routinely used to determine structures with an ease that would have been thought impossible a few years ago. As a comparison, the hepatitis B virus capsid structure was resolved by Tony Crowther and others to 7.4 Å resolution in 1997 – a task that took about a year at the time. Christopher’s group resolved the same structure to 8.2 Å based on a few micrographs in less than an hour.

With an eye on guiding the development and use of electron cryo-microscopes, previous work from the LMB by Mathew Peet, Richard Henderson and Chris illustrated that for most single particle cryo-EM specimens, 100 keV not only simplifies the instrument but also provides the highest potential for information per unit damage.

The LMB’s vision for cryo-EM
The current technical limitation to high-resolution imaging at 100 keV is the small detector area. This constraint arises from the greatly increased electron scatter in the detector – a solution for this is to develop a design that uses a larger pixel whose size matches the range of electron scattering in the detector.

Higher voltage microscopes cost much more due to the need for X-ray shielding and high voltage power supplies. High-end cryo-EM installations can cost £5 million with annual running cost including management in the range of ~£250 000. Chris and Richard believe that 100 keV electron cryo-microscopes could be 10 times cheaper than current versions while delivering the same results for single particle cryo-EM – at additional costs of around £50,000 to set up the room (instead of the £500,000), and running costs at 5% of the current level. Electron cryotomography, a related technique for imaging thick specimen and cells, will still require higher energy instruments.

This demonstration is in line with the LMB’s fundamental objective to reduce the accessibility barrier to using cryo-EM for scientists around the world, and thereby accelerating the long-term impact of cryo-EM in solving important problems in biology and human health. Current efforts at the LMB aim to construct a full prototype microscope based on the principles and specifications set out in this paper.

This work was funded by the MRC, the Cambridge Commonwealth, European and International Trust and a Bradfield scholarship.