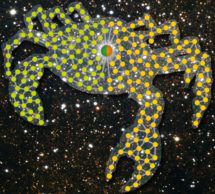 Gene fusions, which occur when two previously separate genes become aberrantly fused together, are common cancer-causing mutations. What remain unknown are the molecular functions of most gene fusions, and the proteins that gene fusions can encode (fusion proteins). This lack of functional understanding is a growing problem, since the number of detected gene fusions in cancer continues to rise with advances in modern sequencing technologies.

Madan Babu’s group in the LMB’s Structural Studies Division in collaboration with Julian Gough’s group at the University of Bristol has undertaken a large, in-depth, inter-disciplinary study of gene fusions and fusion proteins to try to obtain an understanding of how fusions promote cancer development at the molecular level. The project, led by Natasha Latysheva, a graduate student in Madan’s group, began by expanding on the previously known molecular network of gene fusions by an order of magnitude (from 300 to 3,000). The group then investigated the molecular mechanisms by which fusion protein products could affect protein interaction networks and influence disease states.

From this study, they found that genes that form fusions (i.e. parent genes) are different from other genes not known to form fusions. These parent genes tend to be at the centre of protein interaction networks, and their protein products are enriched in elements that mediate interactions between molecules. This suggests that disrupting such genes could have a significant disruptive impact on the cell, since they are central, highly functional entities. Furthermore, they found that fusion events frequently result in the loss of regulatory sites such as post-translational modifications. An additional key finding from the work is that fusion disproportionately connects proteins that previously did not interact with each other, and reside in completely separate regions in the interaction network. These findings suggest that the deregulation of central, interaction-prone proteins may represent a widespread mechanism by which fusion proteins constitutively alter the topology of signalling pathways and promote cancer.

Cancer is an incredibly complex disease and data-intensive bioinformatics approaches can help interpret the molecular mechanism for why certain mutations cause disease, and possibly uncover the first steps of new drug development directions. This study will act as a rich resource for hypothesis generation relating to functions of specific gene fusions, with a potential to guide future experiments and develop therapeutic agents against fusion proteins. Furthermore, given that much of current cancer research focuses on point mutations, this will prompt further investigations into the functions of gene fusions, a form of mutation that is less well understood.

The work was funded by the MRC, the Human Frontier Science Program, the Boehringer Ingelheim Fond, the Canadian Institute of Health Research, IOF Marie Curie Fellowship, and a Lister Institute Research Prize Fellowship.