Home > News & Events > LMB Exhibitions > From bench to blockbuster: the story of HUMIRA® – best-selling drug in the world 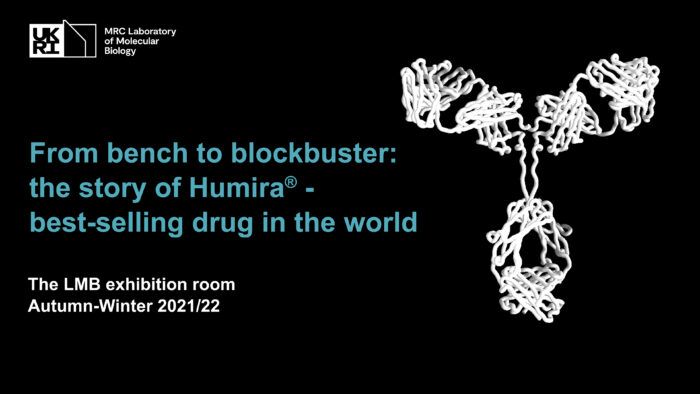 From bench to blockbuster: the story of HUMIRA® – best-selling drug in the world

Antibodies are proteins which are used by the immune system to fight foreign invaders in the body, such as bacteria, viruses and toxins. In response to such an attack, the body will produce billions of antibodies to help the body fight the disease. But each antibody type only recognises a specific harmful agent, known as the antigen.

The science of antibodies

Antibodies bind to antigens, fragments or proteins from infectious agents such as viruses and bacteria.

Scientists already knew that antibodies play a key role in helping the body fight disease and that each antibody recognises a specific antigen. But exactly how antibodies did this was unclear.

In 1963, Argentinian scientist César Milstein began work at the LMB. He wanted to understand how the body generates billions of different antibodies and how the immune system selects the right antibody to fight the invader. To do this, his group needed to isolate a single antibody with a known target and synthesise it so they could study it in the laboratory.

What was discovered at the LMB?

By the 1970s single antibodies against known toxins had been identified and generated but the cells died quickly – limiting research in the lab.

“Such cells can be grown in vitro in massive cultures to provide specific antibody. Such cultures could be valuable for medical and industrial use.”
Milstein & Köhler, Nature 256:495-497, 1975

César and Georges fused myeloma (bone marrow) cells with spleen cells from a mouse previously injected (immunised) with sheep red blood cells (the antigen), creating a hybrid cell called a hybridoma. They kept the cells for two weeks in an incubation broth. A small number of hybrid cells survived, formed little colonies and grew. Each colony of hybridoma cells (a clone) produced its own unique antibody molecules against the sheep red blood cells: a monoclonal antibody.

For this work, César Milstein and Georges Köhler were awarded the Nobel Prize for Medicine in 1982.

Following their discovery, César and Georges successfully generated other monoclonal antibodies in large quantities. They were soon inundated with requests from labs around the world for samples of their cells and so, in 1978, the Medical Research Council entered into an agreement with a commercial company, Sera-Lab, to distribute the cell lines. This led to the commercialisation of monoclonal antibodies through patents and licences.

But there was a problem. The monoclonal antibodies did not work well in humans, as the human body rejected these rodent-originating antibody proteins.

How could they be made suitable for diagnosing and treating human diseases?

Developing solutions to this problem

In the late 1980s, following in César’s footsteps, Greg Winter and Michael Neuberger at the LMB, began to explore various solutions to the rejection problem.

Michael had been studying antibody genes and the DNA elements that control their expression. His vectors facilitated the expression of a range of engineered antibodies, and in several collaborations he created and/or characterised some of the first engineered chimaeric and humanised antibodies. These antibodies fused the variable region of mouse monoclonal antibodies with the constant region of human antibodies, making the monoclonals more acceptable to the human body.

In other collaborations, Michael worked with transgenic mice to create mice that produced wholly human antibodies. This work had a huge impact on the development of therapeutic antibodies. Following on from this, Greg Winter developed the phage display method, which uses bacteriophages (viruses which eat bacteria) to isolate human antibodies.

In the phage display method, billions of bacterial viruses are created, each containing a different human antibody gene engineered so that it produces an antibody fragment on the surface of the virus. Rare viruses with antibodies that recognise a particular target can be purified because they will stick to that target, and can then be grown in large numbers. The corresponding gene is then recovered and used to create a full human antibody in tissue culture cells.

If fully human forms of monoclonal antibodies could be isolated in quantity, the potential benefit for patients was huge

Greg led the work on phage display and together with David Chiswell he founded the biotechnology company Cambridge Antibody Technology (CAT), to exploit this technology. Their aim was to create a pipeline of fully human monoclonal antibodies which could then be developed for use as drugs to treat disease.

For this work, Greg Winter was awarded the 2018 Nobel Prize for Chemistry.

Rheumatoid arthritis was chosen as the first human condition to target. Researchers already knew that a protein called Tumour Necrosis Factor-α (TNF-α)  in the human immune system can cause the excessive inflammation associated with autoimmune diseases like rheumatoid arthritis. This leads to pain and damage to bones and joints.

Such was the potential of this new drug candidate that, only two years after its discovery, clinical trials were underway to test adalimumab as a treatment for rheumatoid arthritis

In 2003, after very successful stage 3 clinical trials, HUMIRA® – HUman Monoclonal Antibody In Rheumatoid Arthritis – was launched. This was the first ever fully human monoclonal antibody drug approved for use in patients.

How does Humira® work against rheumatoid arthritis?

Tumour Necrosis Factor-α (TNF-α) is a molecule that is normally produced by immune cells when fighting an infection. It causes inflammation which helps to clear the infection and ultimately heal the affected tissue.

In some diseases, for example rheumatoid arthritis, too much TNF-α is produced and this leads to unwanted and persistent inflammation resulting in tissue damage. HUMIRA® is able to bind TNF-α, preventing it from reaching tissues and therefore stops or limits the inflammation.

Vanessa Duke has been taking HUMIRA® for rheumatoid arthritis: “Having to live with pain every day, it is not only frustrating but very depressing. I have been prescribed HUMIRA® and I can’t begin to tell you how this has really made a difference. It has given me my life back, from having trouble brushing my hair, I am now gardening, going to the gym and have been skiing, something I never thought my joints would cope with! It is so great to have some energy again.”

In 2017, HUMIRA® was treating 500,000 patients and its full potential was still being explored. It is now licensed as a treatment for a range of autoimmune diseases and scientists are still discovering new applications.

Monoclonal antibody technology is behind one third of all new drugs introduced worldwide.

The technologies developed by Greg Winter and Michael Neuberger have been used in the development of over half of the marketed antibody therapies, including Lemtrada (Campath) for multiple sclerosis and the breast cancer drug, Herceptin. There are also therapeutic products for leukaemia, asthma, arthritis, psoriasis and transplant rejection, with dozens more in late-stage clinical trials.

The LMB’s discoveries have generated an income for the MRC of over £600 million, which has been ploughed back into scientific research. This enables the scientists at the LMB to continue to pursue innovative and original research.

Monoclonal antibodies are also extensively used as reagents for scientific laboratory discoveries. Biotechnology companies produce tens of thousands of different monoclonal antibodies. These are used as labels to identify and purify cell populations, as scaffolds to purify proteins, as tools to quantify other proteins, as aids in structural studies and as versatile reagents to visualise details of the organelles and molecules inside cells.

The story of HUMIRA® started with a fundamental scientific challenge at the LMB. The tool devised to solve this has led to medical applications benefitting millions of people around the world