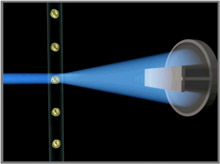 The LMB’s Flow Cytometry facility gives its researchers the ability to characterise, quantify and separate cell populations on the basis of surface and intracellular markers.

The facility provides researchers with both a service and training in new techniques. For example, it provides advanced flow cytometry applications, such as DNA cell cycle analysis, cell proliferation and apoptosis measurements, calcium flux measurements, and multi-colour immunofluorescence analysis. It also supports innovative techniques such as sorting of particles, emulsions or bacteria and provides a routine cell sorting service including single cell cloning, rare event sorting and high speed sorting.

Users of the facility have access to ten flow cytometers. There are four high-speed sorters capable of sorting at rates of up to 70,000 cells per second (three Sony Synergy systems and one FACSAria Fusion). There are six analysers (two Fortessa, one LSRII, one Eclipse, one Spectral Analyser and one CytoFLEX).