The LMB’s translational strategies have evolved over time and with experience. Today, the approach taken in commercialising an invention is likely to depend on a number of factors including the nature of the discovery and the maturity of the marketplace. 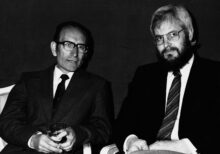 During the 1970s the National Research and Development Corporation (NRDC) owned the rights to inventions arising from work in the MRC. Controversially, the NRDC did not patent one of the LMB’s key discoveries: the invention of monoclonal antibodies (in 1975) by George Köhler and César Milstein.

With hindsight this decision actually proved helpful. The rodent monoclonal antibodies produced by this technology did not provide the anticipated ‘magic bullet’ for cancer and the lack of a patent may have helped stimulate the field to make vital additional steps in genetic engineering. A few years later, LMB scientists’ working on antibody reagents and their know-how helped in the development of antibody programmes at Celltech, the UK’s first biotechnology company (founded in 1980).

In 2010 Ana Fraile produced a film about Cesar Milstein and the development of monoclonal antibodies. Please find the video here.

By the mid-1980s the MRC had acquired the right to take out patents on MRC inventions, and by the late 1980s had started to non-exclusively license the patents on humanised antibodies and transgenic human antibodies to commercial companies.

The MRC’s aim in granting non-exclusive licences was to encourage the uptake of the technology, although some areas of exclusivity were reserved for Celltech. More than 40 companies were granted licenses, facilitated by packaging of the MRC patent with another from Celltech. In 1989 the MRC’s Collaborative Centre (predecessor of MRC Technology and now LifeArc) initiated an antibody humanisation service, leading to the therapeutic antibodies Tysabri (approved US) and Actemra (approved Japan). 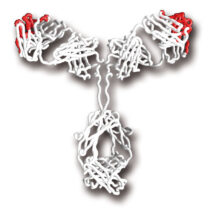 To exploit the LMB’s work on human antibodies the MRC adopted a different approach, granting exclusive licences on antibody repertoires (with the exception of single domain products) to local start-up company Cambridge Antibody Technology (CAT), founded in 1989. Inventors and associated co-workers also had a founding stake or option packages in CAT and at various stages senior LMB scientists acted as members of the Scientific Advisory Board and as non-Executive Directors. In return the MRC received funding for a programme of research, an equity stake and an agreed share of royalties.

Seed funding for CAT came from Peptech (Australia) and was mediated by former LMB visiting scientist Geoffrey Grigg, Peptech’s founder. A highlight of CAT’s work was the development of Humira® (with BASF), the first human antibody to be FDA-approved. This antibody, for treatment of rheumatoid arthritis, proved a blockbuster drug with total sales of more than $10 billion by the end of 2009. Other antibodies followed, including BENLYSTA™, which promises to be the first new drug treatment for systemic lupus erythematosus (SLE) in 50 years and Abthrax™, against infectious anthrax, which has been stockpiled by the US Government against terrorist attack. In 1997, CAT was listed on the London Stock Exchange, and in 2006 was purchased by Astra-Zeneca with a valuation of about £700 million.

In 2000, Greg Winter and Ian Tomlinson at the LMB founded Domantis to develop antibody therapeutics using single domains. The company was granted an exclusive licence to develop the LMB’s work and seed funding was provided by the MRC associated venture fund (MVM). In 2001, a major investment was secured from the biotechnology company Peptech (Australia) and Dr Tomlinson left the LMB to head Domantis research. In late 2006, Domantis was purchased by GSK for £230 million.

In 2007 Richard Henderson and Chris Tate co-founded Heptares Therapeutics to exploit pioneering new technology to stabilise G-protein-coupled receptors. GPCRs represent the single most important family of drug targets in the human body and Heptares is working on its own and with partners to discover new medicines to target key diseases such as Alzheimer’s, schizophrenia, type 2 diabetes, cancers and HIV.

The company raised more than £40 million from leading life science venture investors and signed drug discovery collaborations with AstraZeneca, Shire, Takeda and Novartis. In 2015 the company became a member of the Sosei group, an international biopharmaceutical company originating in Japan, in a deal worth up to $400M.

Since then a number of companies have been created to develop different technologies and many licences been granted to exploit the work of LMB scientists.