Wnt signalling cascades control animal development and stem cell compartments in many tissues, and are amongst the most ancient and highly conserved signalling pathways within the animal kingdom. One key effector is ?-catenin, which is stabilised in response to Wnt stimulation; ?-catenin thus binds to TCF factors at Wnt-responsive enhancers to switch on the transcription of linked genes. Inappropriate activation of ?-catenin can cause cancer in many human tissues, most notably colorectal cancer.

We study the molecular functions of individual Wnt signalling components and their mutual interactions, using cell-biological, biochemical and structural approaches, as well as fly and mouse animal models. One focus is on the role of Dishevelled in assembling signalosomes by dynamic polymerization during Wnt signalling, to block the function of Axin degradasomes in destabilising ?-catenin. 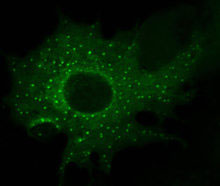 Another focus is on the Wnt enhanceosome and the role of its core component Chip/LDB-SSDP in responding to Wnt signalling through Pygo-BCL9 and integrating this with other signalling inputs. Ultimately, our work is aimed at identifying and developing the potential of new Wnt signalling components as therapeutic targets in cancer.