The generation and evolution of biological form 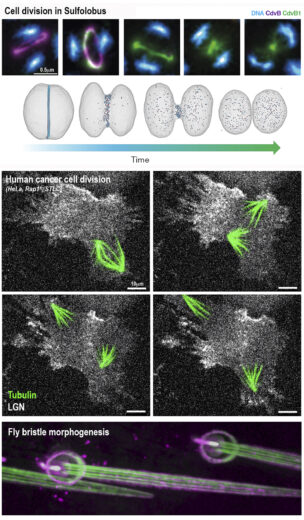 My lab is interested in the generation of biological form or “morphogenesis”. While we have long studied morphogenesis in the context of developing tissues, our main focus has always been on events at the cellular scale. This is because the cell is the unit of life and because tissue movements are driven by changes in the shape and mechanical properties of individual cells, which in turn depend on forces generated by a small number of cytoskeletal elements within these cells.

The most extraordinary and fundamental of all morphogenetic processes is cell division: the process by which one cell becomes two. During division, in the space of a few minutes, all the component parts of the cell must be moved apart and partitioned into two daughter cells. Moreover, the process must be precise, since errors are associated with diseases like cancer in humans, and frequently cause cell death.

While our group, like many others, has long studied the cell biology of division in eukaryotic cells, it has recently become clear that many aspects of the process have been conserved over billions of years of evolution. In fact, many have their origins in archaea. To explore the fundamentals of the division process, my lab is therefore studying how both archaea and eukaryotic cells divide into two, using Sulfolobus (an archaeon), Drosophila, yeast and human cells as model systems. By doing so, we aim to identify the most deeply conserved processes and to discover how the division machinery changed during the evolution of eukaryotes. We also expect this work to shed light on the process by which the eukaryotic cell first emerged from the symbiosis of an archaeal cell and its bacterial partner – something that remains one of the greatest mysteries in the history of life on earth.

Finally, given the fundamental nature of cell division, we expect this work to improve our understanding of the way the core division machinery functions to aid normal tissue development and homeostasis and, when it goes awry, contributes to the evolution of metastatic cancer.